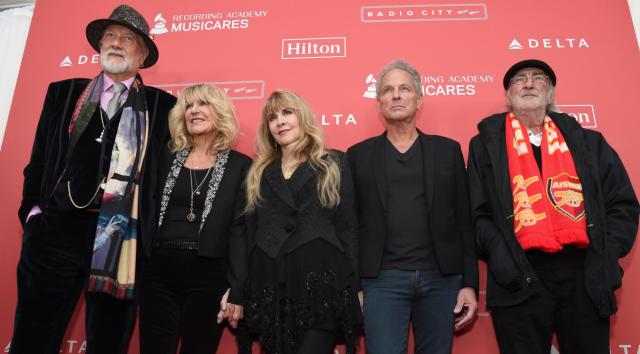 I’ve been watching Fleetwood Mac perform on YouTube.  The uploaded footage I found was from the nosebleed section during a pre-Grammy performance, (I think.)  I could only make out vague shapes on the stage.  Fortunately, there was a jumbo screen further back showing closer images I could see.  🤓

They showed all the band members briefly as they performed.  The camera switched views too often, (and wrong.)  I guess the director didn’t know to keep the camera mostly on Stevie Nicks, then jump to Christine McVie (who might not look up immediately, so wait.)  Next to Lindsey, and hold until he rocks out.  Then try and find John.  (He’ll know when it happens and will turn and walk away without missing a beat.) Finally, zoom in on Mick until he pulls The Face, and back to Stevie Nicks.

I could barely see Christine McVie in the video, but her silhouette looked fabulous.  My heart is still pounding in my chest.  I know music is powerful, intellectually.  But something in me remains astonished every time it’s proven.   I suppose I just can’t believe anything can be so powerful over how I feel.  I’m the boss of me, but Fleetwood Mac just made me involuntarily gasp out loud over a poorly recorded, blurry, video of them performing The Chain and Golddust Woman.

When they showed the audience, I saw a lot of people having the same reaction.  The band teased a little at first.  They started up both songs slowly, each instrument and voice joining gradually.  I think they know we weren’t breathing, (just hovering on the edge of the universe, waiting for them to take us back to that particular place only they know how to reach.)   I’m glad I’m not the only one affected this way.  The odd ones were the few who were noticeably startled by how everyone around them suddenly stopped blinking and breathing.  I’m officially ecstatic I came out from under that rock.  Holy shit, my heart is still pounding.

At least I know I won’t fall apart during their concert when I go.  I’ll be too mesmerized to do anything but stare and grin.  I saw what that looks like, tonight.  Every time the camera showed the audience, it was people with huge smiles who refused to blink until it was over.   I bet I’m not the only one who gasped, either.  (I think it’s because my body needed me to start breathing again.)  It probably looks somewhat creepy from the band’s viewpoint to look out and see thousands of people reacting this way.  Pretty sure they’re used to it by now, though.

Welp.  At least now I know I want to get the closest seats available no matter the cost when I go see them.  (I can’t see for shit.)  I’m so thankful to the people who upload concert footage to YouTube.  Thanks for sharing it with those of us who couldn’t be there with you.  I also hope a professional recording was created to be released later for UHD streaming.  But most of all, I hope Fleetwood Mac still loves performing.

The video that started playing automatically afterward was of Stevie Nicks cussing.  It was several instances mashed into one hilarious short video.  It was uploaded very recently, so not many views.  She swears as much as anyone else but doesn’t like to do it on stage.  Then she did (on stage) by accident and put both hands over her mouth and walked away from the microphone, (probably hearing her parents call her out in her head.) 😂😂

Sometimes, I suck at being able to tell if Stevie Nicks is being serious or kidding.  She’s definitely funny in general, but she’s so good at sarcasm and deadpanning, I usually have to replay it in my mind before I realize she just said something wicked hilarious.  I don’t feel too bad about it because, on most of her interviews, the person interviewing her doesn’t pick up on her wit.  M. said some of them probably think she’s just a kook or something because they think she’s serious.  The best part is she can tell when someone just doesn’t get it and she has fun with it.

I understand why after watching so many of them.  Reporters ask her the most assinine questions.  She doesn’t say, “That’s a dumb question.”  She messes with them a little instead, and it’s hilarious.  She went into ninja mode on one reporter and started doing martial arts motions rather than responding to an offensive question.  I laughed so hard I fell over.  I learned something vital when I saw that.  Getting older isn’t something I fear anymore because now I know I’ll still be the same person;  I’ll just move slower.  I can do that.  I’m just glad to know I won’t suddenly change into someone too serious and phony to be awesome, like Stevie Nicks.